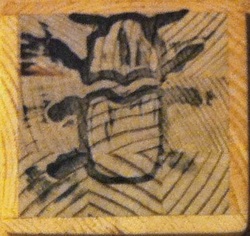 The January 19, 2013 Bug Crawl event kicked off with a Way Park stump speech by organizer Linde Manlove, welcoming everyone. The day featured six hours of live music at 3 venues:  The Buglin' Bull, The Naked Winery, and the Bank Coffee House in Custer, South Dakota.  We had over a dozen scheduled performers and many others who played during the open mic times.  We also recorded 12 original songs about the Bark Beetle infestation.  At the event the audience was asked to rate their well-being on a  Stages of Grief chart, write limericks and poems, leave messages on our trees of hope-acceptance-?, add to our story starter books (I Was a Teenage Bark Beetle), and talk with their neighbors about how the beetle infestation was impacting their lives.  Over 400 people attended the event.